Industrial Ventilation And The Internet Of Things: Optimizing HVAC Systems

Industrial Ventilation and the Internet of Things: Optimizing HVAC systems

A
by Alan Jackson — 2 years ago in Artificial Intelligence 3 min. read
2208

While all of these elements within the two categories are valuable and relevant to the modern world that we live in, let’s consider the industrial ventilation category and its ability to interface with the Internet of Things (IoT).

Industrial ventilation: What and why

Adel Zakaria put together the following industrial ventilation definition as published in the research paper of the same name.

“Ventilation is the mechanical system in a building that brings in “fresh” outdoor air and removes the “contaminated” indoor air.”

Additionally, “in a workplace, ventilation is used to control exposure to airborne contaminants. It is commonly used to remove contaminants such as fumes, dusts, and vapors, in order to provide a healthy and safe working environment.”

In other words, industrial ventilation, or ventilation in the workplace, is a mechanism used to control the airflow inside an industrial building such as a warehouse or factory.

Secondly, but equally importantly, ventilation is used to remove dust, contaminant fumes, and vapors from the building to ensure that employees work in a healthy working environment.

” This confused state remained for three days and then cleared up. However, the more severe consequences that followed this confused state were “transient bone marrow suppression and evidence of liver cell damage.”
Also read: 10 Best Chrome Extensions For 2021

The Internet of Things: What and why

“The Internet of Things, or IoT, refers to the billions of physical devices around the world… connected to the internet, all collecting and sharing data.”

Because of the arrival of well-priced computer chips and the ubiquity of wireless networks, it is possible to create an IoT network from any number and type of devices.

Succinctly stated, Steve Ranger, in his zdnet.com article, describes the fact that connecting a number of different devices into a single network adds “a level of data intelligence to devices,” allowing them to communicate with each other in real-time without needing human interaction or a human interface.

Ergo, IoT networks are “making the fabric of the world around us more smarter and more responsive, merging the digital and physical universes.”

The birth of the Internet of Things is fundamentally intertwined with the Fourth Industrial Revolution. The best way to describe this revolution is to consider a definition by Klaus Schwab, the executive chairman and founder of the World Economic Forum.

“We stand on the brink of a technological revolution that will fundamentally alter the way we live, work, and relate to one another. In its scale, scope, and complexity, the transformation will be unlike anything humankind has experienced before.”

The Fourth Industrial Revolution… is “characterized by a fusion of technologies that is blurring the lines between the physical, digital, and biological spheres.”
Also read: Top 7 Work Operating Systems of 2021

HVAC systems and the IoT 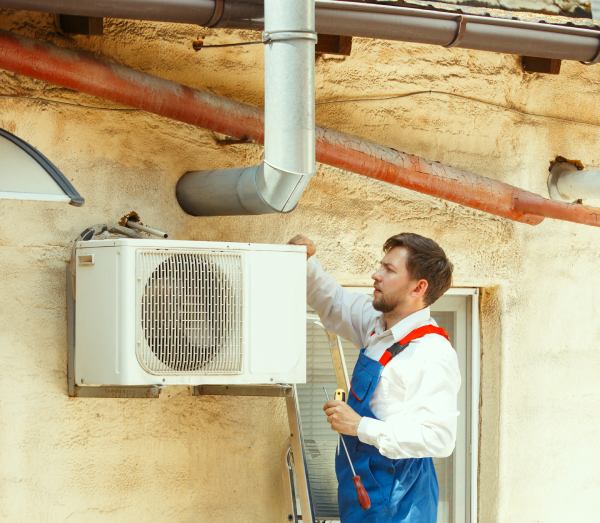 As with all things, the latest technological advancements can positively and negatively affect the human race. This is particularly true of the HVAC environment.

By way of expanding on this statement, let’s consider the following scenario.

Let’s assume you are the senior manager of a manufacturing concern housed in a large factory. You need to upgrade your air conditioning systems. You are also a great believer in technology and would like to implement an HVAC management system driven by the Internet of Things.

The most important benefit of the IoT is that all of the devices linked together can be monitored from a centralized location, the Internet, with the primary advantage of this architecture being improved energy management.

Energy management and improving energy usage and efficiencies is a foundational practice in the twenty-first century. The report titled “Design and Implementation of IoT-based HVAC and Lighting System for Energy Saving,” correctly notes that the arrival of the Fourth Industrial Revolution and its associated developments in industry and technology, as well as an explosion in population growth, have increased global energy consumption. This, in turn, is playing havoc with the environment leading to an increase in greenhouse gasses and global warming.

Buildings have increased and continue to grow in size; thus, using more energy. However, it is essential for the environment, and by extension, the global population that reduces greenhouse gasses via the reduction of energy consumption has to be front and center for any industrial concern.

Finally, the reduction in energy consumption is possible and probable by implementing an HVAC system with partitioned nodules, linked to a central dashboard via the Internet of Things, giving supervisors and management the ability to monitor energy usage per node or partition.

PointAvatar methods are fascinating and it is especially used in the gaming..

If we look back at 2022, we have seen a tremendous and glorious upbringing by..

Text generators powered by artificial intelligence are proliferating at a rate..