A
by Alan Jackson — 2 years ago in Artificial Intelligence 4 min. read
2446

The development of immersive realities has come a long way since its inception in the late 90s. In 2000, AR Quake launched the first AR game and the following 20 years have produced exciting evolutions in the ways we merge real and virtual worlds together for multiple applications.

Sustained growth and awareness of the worlds of augmented, virtual and mixed reality have produced an industry worth over 165 billion USD in 2020.

Despite the continued expansion of applications, there still lies a confusion in understanding how these concepts work.

Typically, Virtual and Augmented reality, though sometimes mistaken for one another, are widely understood.

These technologies have managed to find their place in popular culture over the years through gaming and entertainment. Mixed reality has lagged slightly behind and has often been equated to AR in some form.

With this in mind, let’s explore these tech concepts individually and dissect the relationship between Mixed and Augmented Reality.

AR invites users to apply virtual objects and scenery over the real world in real-time. It world by ovulating computer-generated content on top of the real-world-view.

Computerised techniques and simulations like text, animation and speech recognition, ultimately provides an additional digital element to the real world.

This superimposed digital overlay can superficially interact with the real-time environment by enriching the real-time camera view of a user’s device with digital information.

AR has its place in gaming, entertainment, healthcare, business and production as well as education. Its applications are vast, yet, a user’s interactions are limited.

It was, after all, built with the primary objective of providing a rich audiovisual experience. In terms of interaction with the digital realm, AR will only go as far as you take it.

It’s an exciting technology providing scope to discover, explore and interact with content and data for businesses and consumers alike.

The release of Google Glass in 2013 was the beginning of consumer-AR relations. The device was ahead of its time, but expensive and clumpy.

The product was discontinued in 2015 after beta versions failed to gain traction due to its high price tag of $1,500, clumsy design and concerns about privacy. Just 5 years down the line, nearly each and every one of us is infrequent interaction with Augmented Reality technology.

Since the demise of Google Glass, companies have taken note of the prospects of AR and have focused their efforts on sleek designs, affordability and user experience. Notable successors include the Aryzon 3D AR headset, Epson Moverio BT-35E and Vuzix M100.

There’s a good reason as to why MR is so often mistaken for AR. Some have gone as far as to say that MR is effectively AR ‘on steroids’. Mixed reality projects 3D digital content onto the real environment that is spatially aware and responsive.

Here, virtual objects become interactive parts of the real world. A ball, for instance, can bounce off walls and roll under tables.

The real excitement is that it’s possible for users to interact with this virtual content and manipulate it. That ball bouncing off walls? Users of MR can themselves kick it around a room. Mixed reality can work in two ways:

Mixed Reality brings the best of both virtual and augmented reality worlds together. It generates an entirely new environment and visualisation becomes possible wherein digital and physical objects coexist and interact in real-time.

Rather than residing in an entirely digital world- as with virtual reality- users can navigate through both real and virtually enhanced spaces at the same time.

Unlike Augmented Reality- whereby users can merely envisage a digital overlay- users of Mixed Reality can visualise and interact with digital objects.

Visual objects are effectively hooked into the users real world- augmenting their environment. As such, virtual interactions appear to be real. MagicLeap has dubbed itself as a ‘wearable computer’, allowing developers for content extraction and spatial browsing.

Microsoft’s Hololens, originally released in 2016, attained mainstream attention with its self-contained holographic computer that allows users to interact with digital content around them.

The Mixed Reality experience is far more ambitious than AR. MR goes beyond simply superimposing digital information on top of what we see through a screen.

Rather, it integrates it into the space around us and lets users manipulate the digital content- just as if it were a real-life object.

Mixed Reality and Augmented Reality: A Glance at the Differences 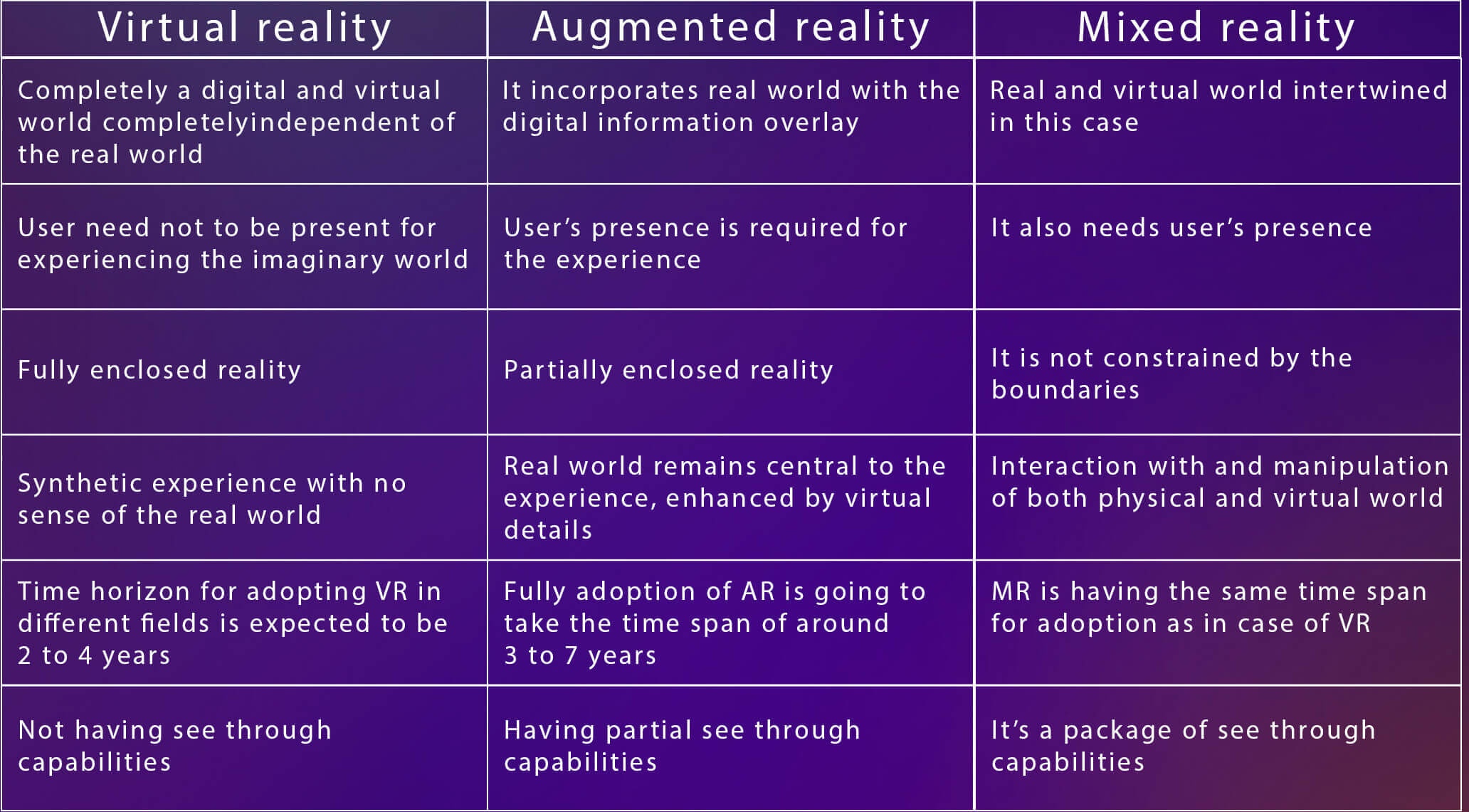 Having explored the way each reality technology holds its own, it’s valuable to examine the ways in which they compare and contrast side by side.
Also read: iPhone 14 Pro Max Is Apple’s New iPhone To Be Launched In September (Know The Release Date, Specification, Rumour & More)

As we now know, one of the core differences between MR and AR is the level at which users can interact with, manipulate, use and place the virtual objects in the real environment.

The application of all MR, AR and importantly VR has expanded to effectively all industries. From gaming and tech to healthcare and construction- the use of these technologies has improved efficiencies across the board.

What’s the future of reality technologies?

Mixed reality can be said to be the next iteration to Augmented Reality since it offers better visualisation, information and user experience. In an ideal world, both technologies would be able to merge with one single system.

Meaning users would be able to seamlessly switch between immersive and completely virtual environments to their own real-world spaces that are simply augmented. New devices and applications should be tailored toward this merging of technologies

What Is Emotion AI? Explained by 10 Great Industry Expert(s)

This is not the first time that ‘The Next Tech’ community has shared their..

How to Know Artificial Intelligence Can Improve Your WordPre...

More businesses are looking for new technologies to integrate with them, like..

For years, Artificial Intelligence has gleaned its aplomb above-than-decent..