The Future Of Extended Reality (XR) & Qualcomm Leading It.

What does the future look like? Virtual Reality (VR) and Augmented Reality (AR) provided the answer, in this regard, in a meaningful way.

And now a new emerging technology called Extended Reality (XR) is in the evolution to make the FUTURE and REALITY intriguing.

In this blog, we’ll together delve into the future of Extended Reality. Will explore key components, abilities (key powers), and challenges.

What Is Extended Reality (XR)?

Extended Reality is a real-based experience asserted through emerging technologies such as Augmented Reality (AR), Virtual Reality (VR), Mixed Reality (MR), and everything that comes in the middle.

Currently, VR and AR experiences are catered to through smartphones and other digital devices. But the concept of Extended Reality is farther from smartphone devices.

Virtual Reality: Abbreviated as VR is a technology that simulates the experiences of a user in a digital environment. The experiences are created via the support of tools and software. For instance, a special VR headset or a head-mount display is required to experience the VR courtesy. Currently, the gaming industry and Metaverse realm use the most VR technologies.

Augmented Reality: Abbreviated as AR is different from VR technology. VR technology immerses gamers in a simulated digital environment whereas AR is computer-generated content that is overlaid in real-world examples. For instance, shopping for furniture and seeing whether it fits into your space using a camera.

Mixed Reality: Abbreviated as MR combines the elements of best of the both worlds. This means digital content is overlaid in the real world hence providing digital and real-world blended experience in real-time. For instance, virtual furniture fitting, virtual makeup applications, and popular social media platforms such as Instagram and Snapchat filters.

The capabilities are far beyond imagination.

This is at least what is verdict in the media by researchers and developers.

XR is like a superpower – that can teleport things in real life, provide an intuitive interaction medium, context shifting ability, and more.

“With XR abilities, we can rethink the possibilities at a glance”

– The Next Tech Team

Following are some vital functions of XR disbursing to users:

Why Is Qualcomm So Exciting About Extended Reality?

You would be entangled to know that Qualcomm is preparing their shift towards innovation to create XR experiences for mobile computing.

In a statement, they have a verdict that “XR is the future of mobile computing, We’re making mobile XR a reality.”

The XR mobile computing will open a huge market capital for Qualcomm. The company is in line with the path of developing foundational technology required for XR, such as immersive 3D graphics, computer vision, machine learning, and 5G technologies.

Immersive means a three-dimensional (3D) image that appears to surround the user. Qualcomm is using immersive technology to make the XR experience more intuitive, advanced, and fun as well as loving.

For making immersive technology a reality, Qualcomm is working on three pillars i.e. ‘Visual Quality’, ‘Audio Quality’, and ‘Intuitive Interaction’ as these are the main elements to focus on.

Besides, various challenges are preceding to make XR experiences better for humans and the world.

Let’s read more on this topic below.

Well, succeeding technologies such as virtual reality, augmented reality, and mixed reality have given tremendous showers of good deeds to the world. The same underlying technologies are powering XR, but with different notions, visions, and achievements to embark on.

Thus, new challenges are generated with complex intuition and immersion. To put this simply, there are many technical challenges to face and have to be solved before XR reaches mainstream adoption.

From many of them, here’s five critical challenges mentioned: 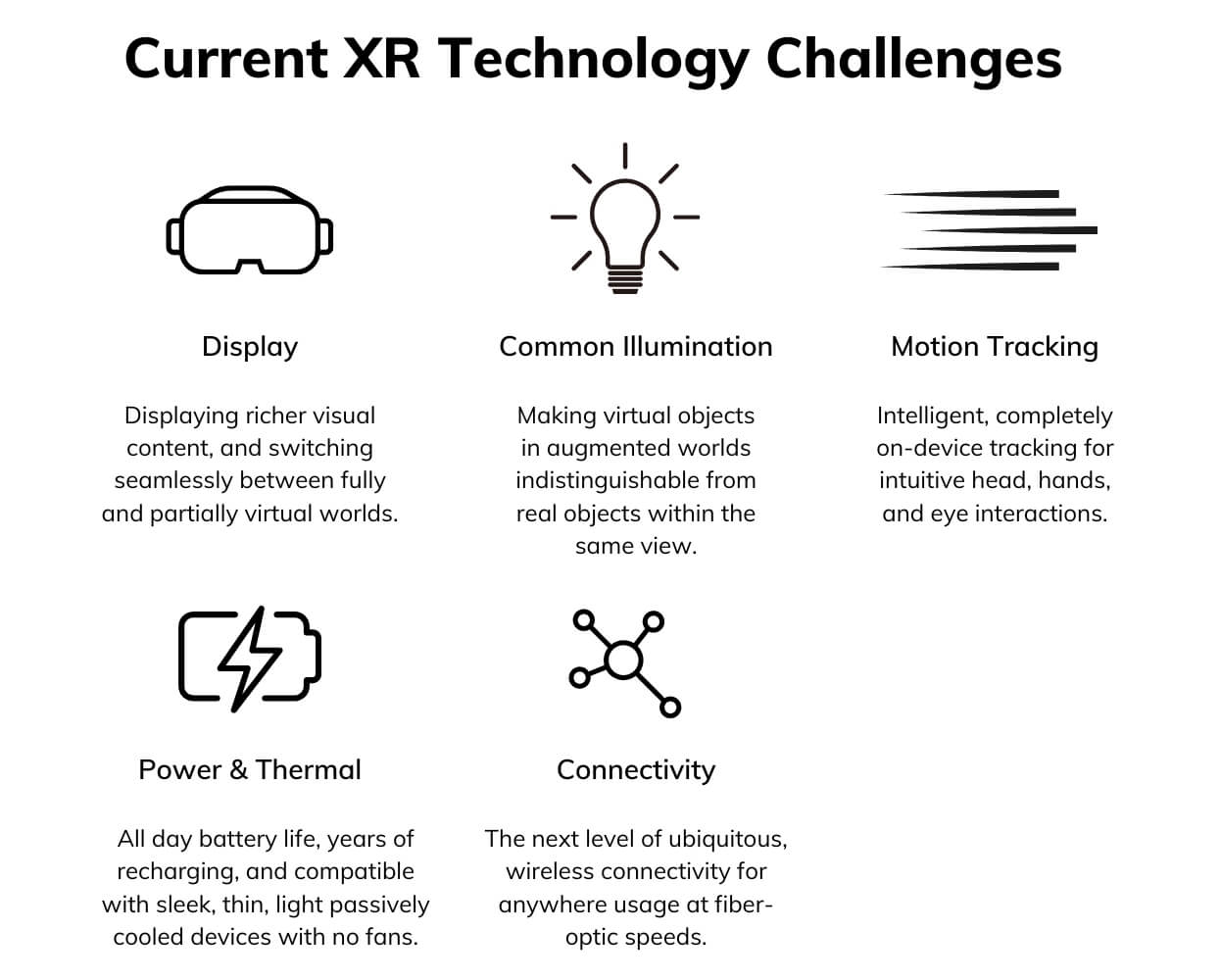 Also read: Best Online Courses to get highest paid in 2021

Will Extended Reality (XR) Be The Future?

What else can I say… I mean absolutely YES

Extended Reality (XR) is surely the future of Gen Z and Alpha.

It is because XR holds invincible technologies and its superpower (discussed earlier) provides exceptional benefits to businesses, individuals, and industries.

This future emerging technology will gradually enhance our daily lives, help us at every moment, and advance our lifestyles to virtual worlds.

If this technology will rule in the future… What industries are popping the innovation dilemma?

As it will soon be the next mobile computing platform, following industries are primitively ruled by this technology.

The quiz is about to see and experience how eXtended Reality will help these industries.

XR is still in the development phase. Qualcomm is the first company taping efforts in building first responder XR glasses to provide virtual, augmented, and mixed reality experiences to people.

Let’s see when it can be available to feel and heavenly experience the Extended Reality realm.

Omniscience – The state of knowing everything